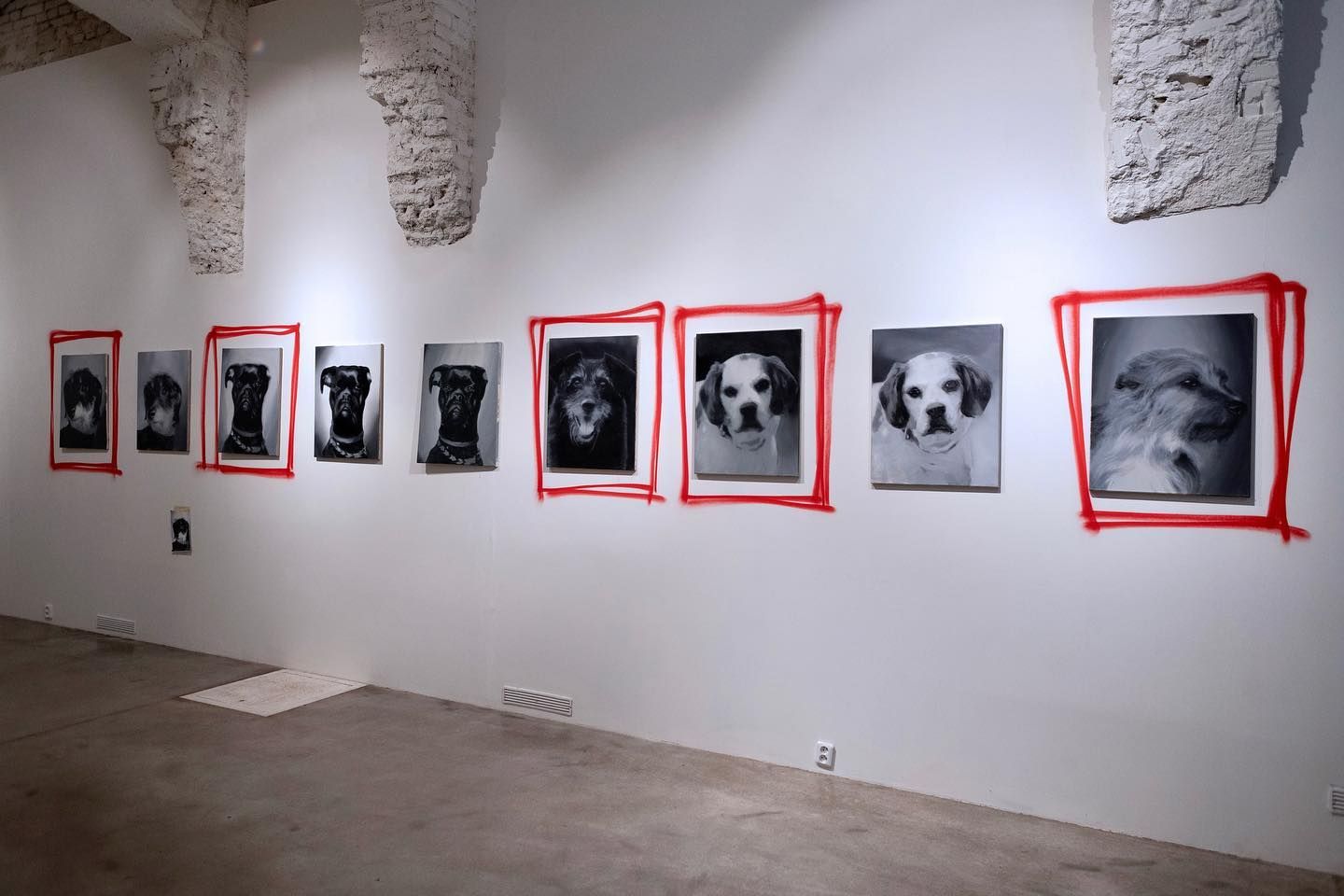 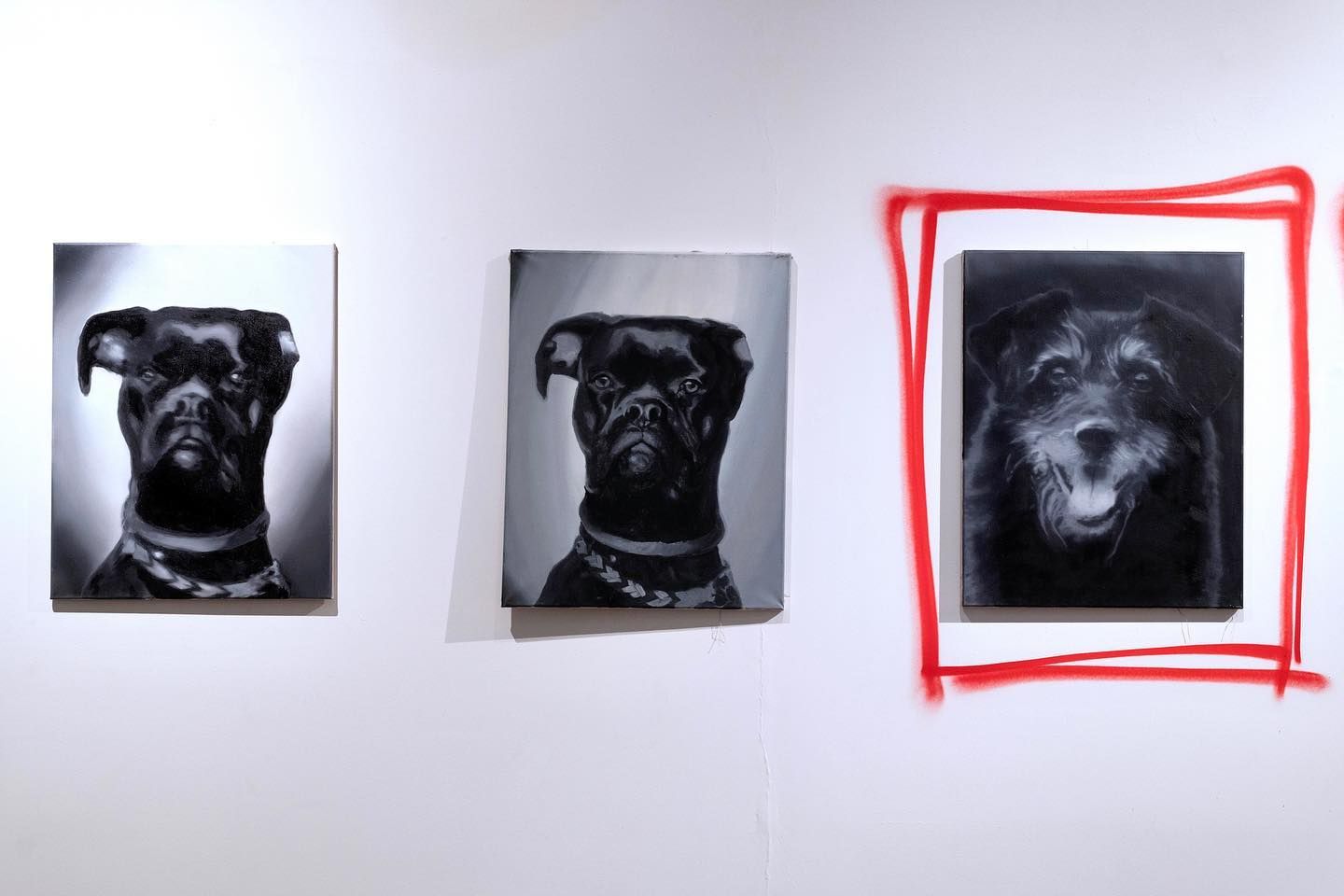 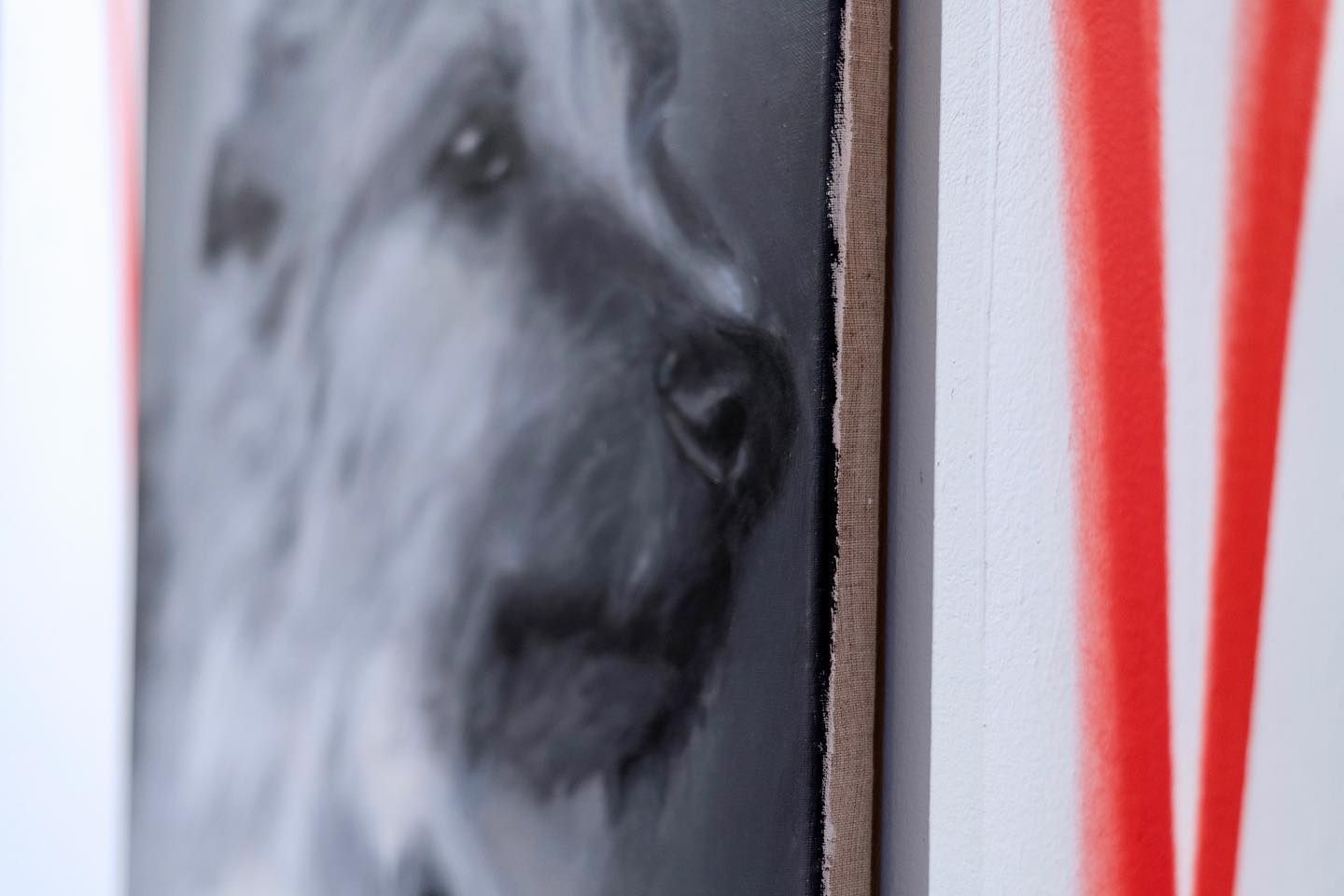 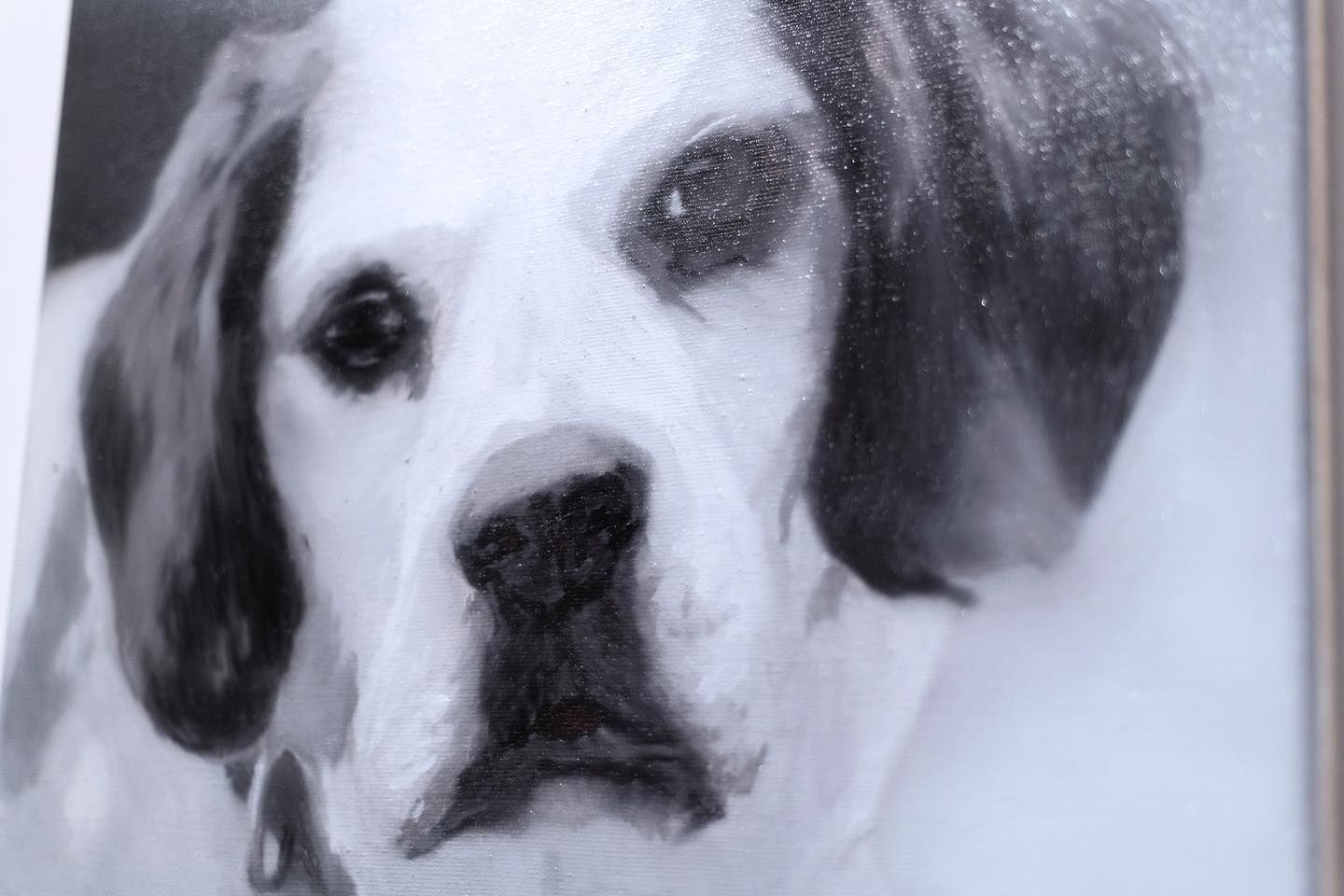 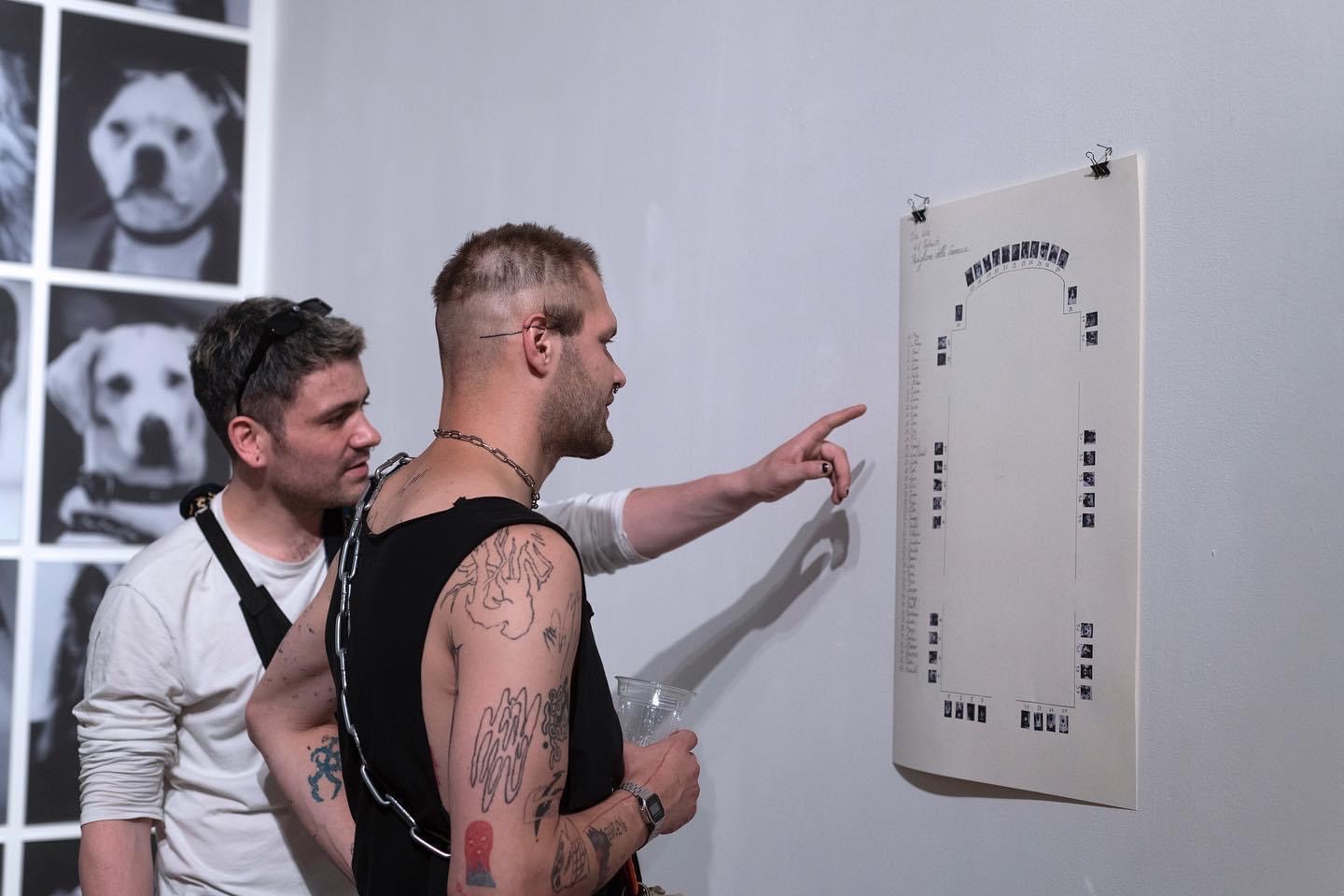 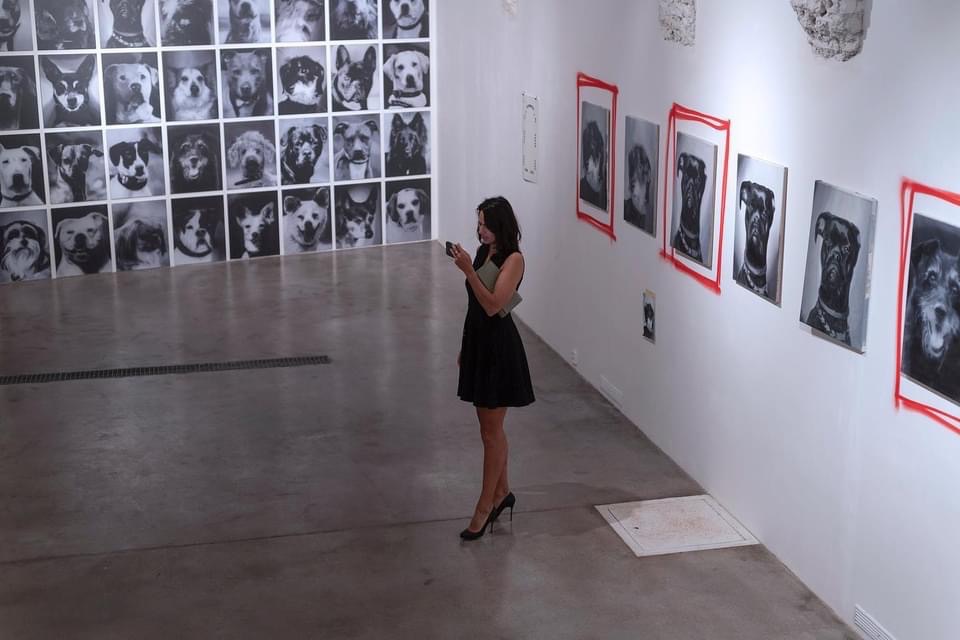 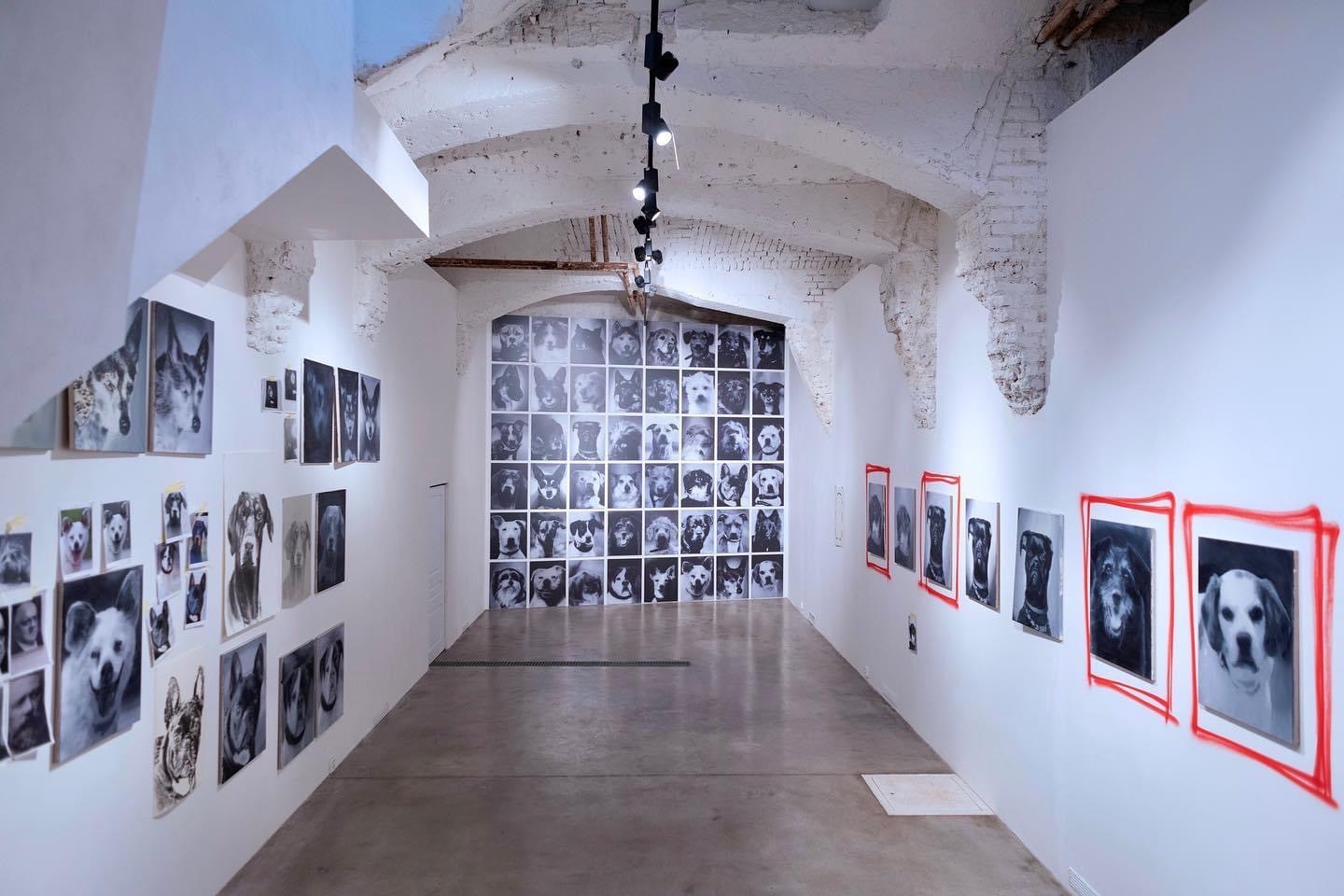 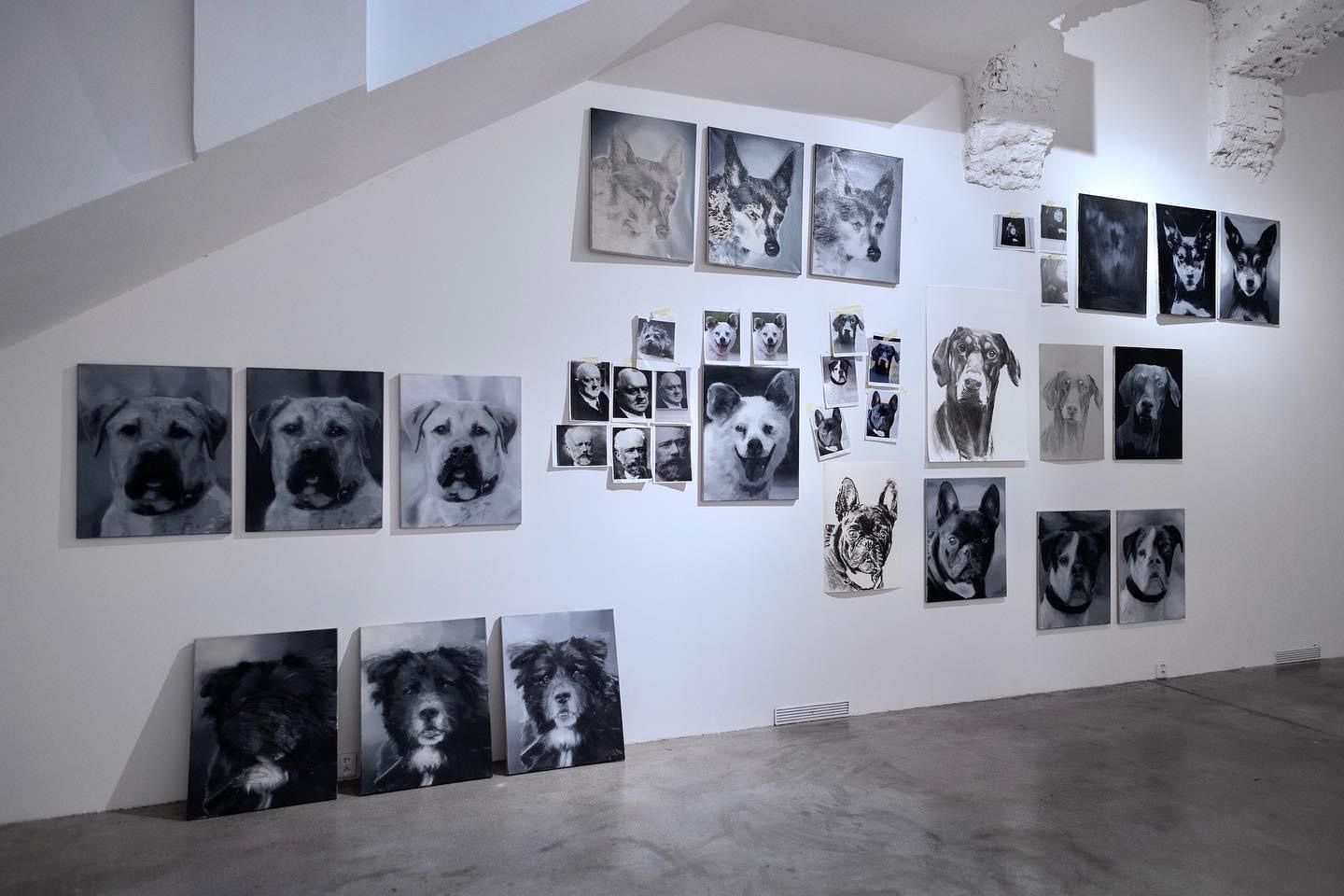 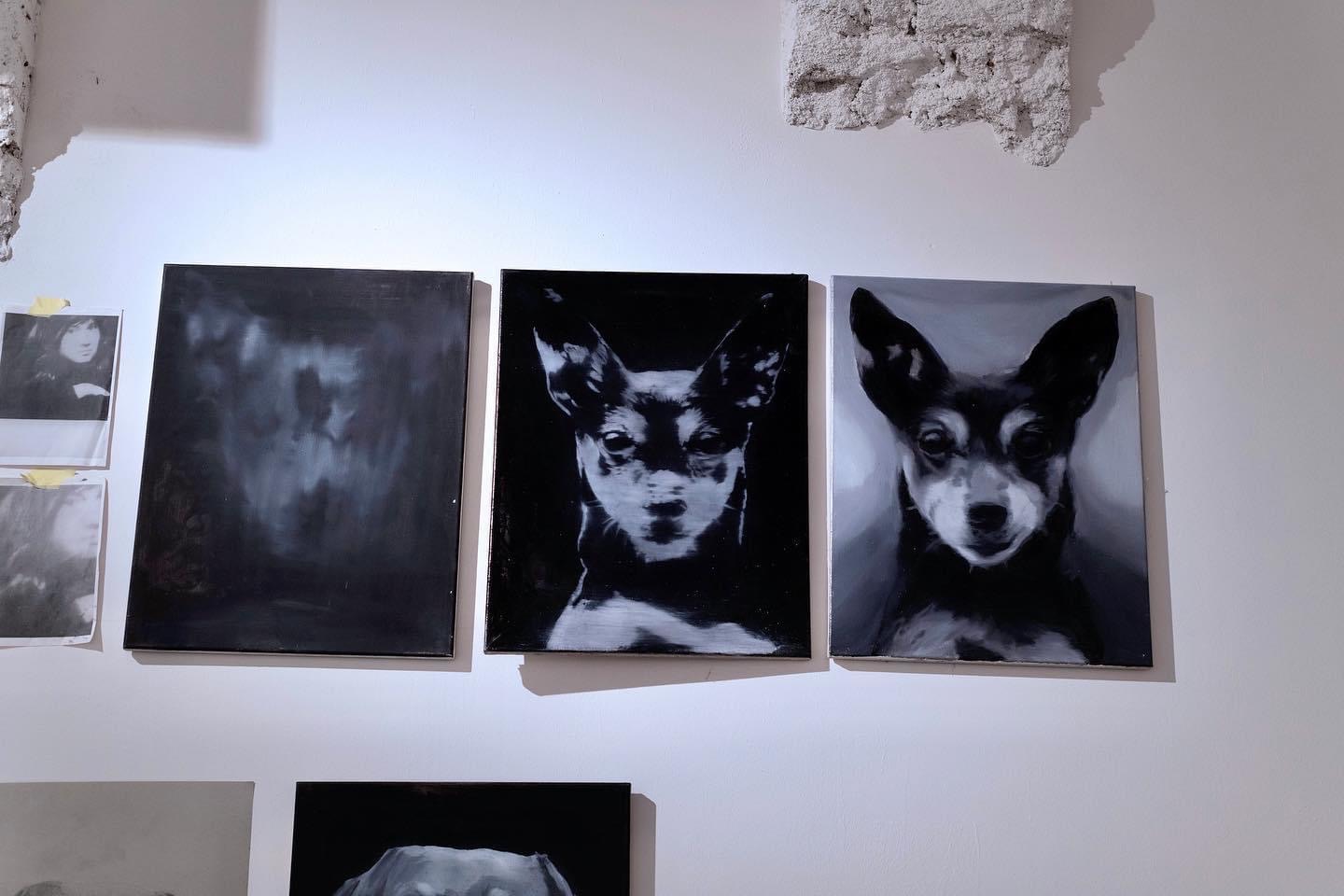 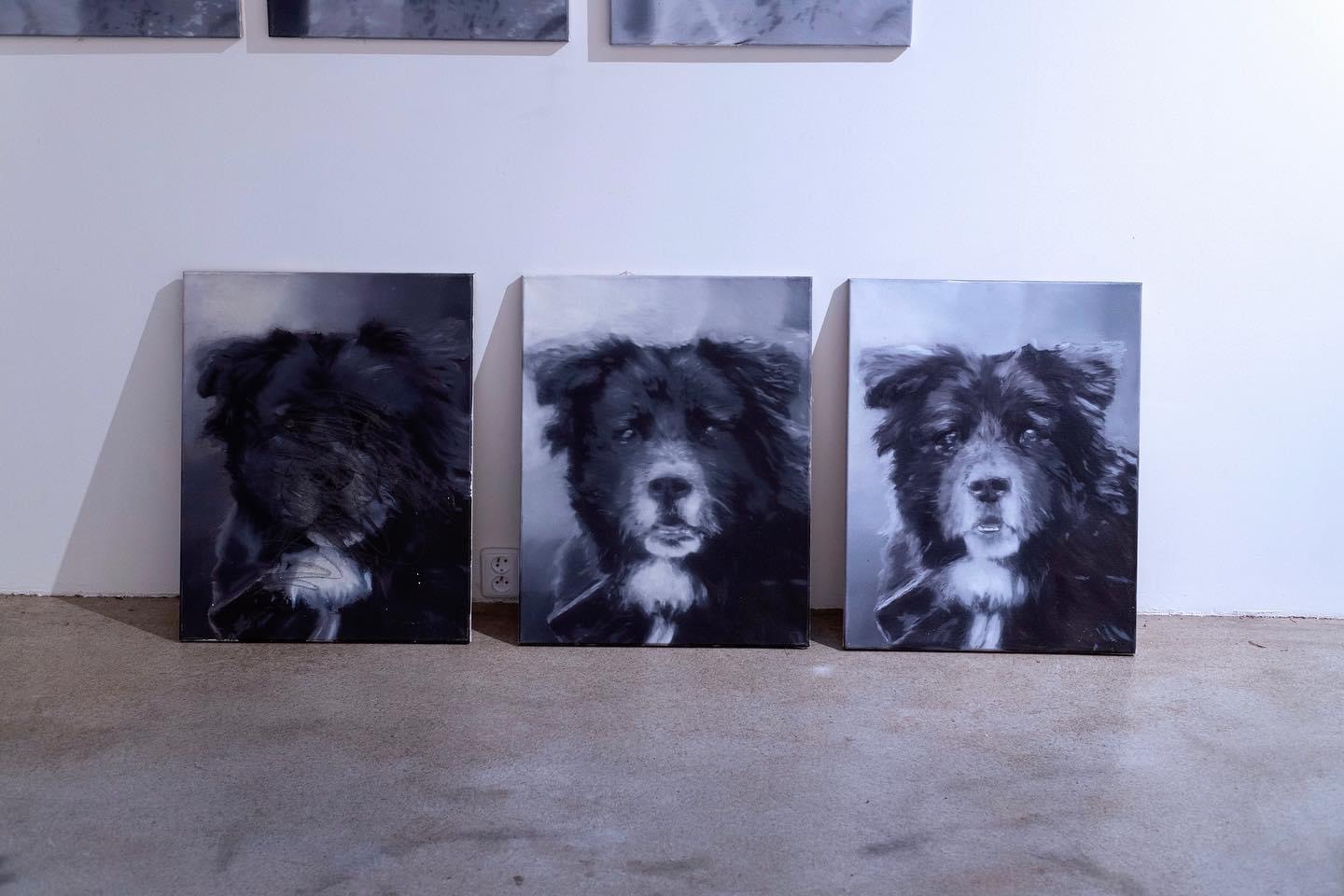 During the night of December 31, 2021, to January 1, 2022, French artist The Wa installed his exhibition „48 Portraits“ in the German Pavilion located in the Giardini della Biennale, Venice. The exhibition consisted of 43 oil paintings of shelter dogs and has been produced over a 5 year period. The exhibition took place half a century after painter Gerhard Richter solely represented Germany at the 36th Venice Biennale with his 48 Portraits of personalities who influenced modernity. ( Only 43 fitted to the German pavilion space).

“ Every idea requires a face, an icon, or an idol. Otherwise, it lacks channels to reach the crowds. Certain ideas go further and create the architecture of thoughts to represent and spread them among people. Once created, they go on until someone reviews them criticality undermines them or even destroys them. At that point, the need for the new icons arises. I somehow thought that if I am to write about The Wa’s intervention into the German Pavilion I’d have to go back in time and examine the story of Gerhard Richter exhibiting paintings of white eurocentric men. True. However, it turns out that this journey took me even further, right to the beginning of the idea of national pavilions in general and the concept of the national state at large. But let’s get back to the facts. When The Wa installation intrude into the Pavilion in the early spring of 2022 it was made as a subversive gesture of repetition taking from a renowned body of work from 1972. The 48 portraits of supposedly famous men were switched for 43 portraits of completely unknown shelter dogs conducted over 5 year period of time. The exhibition faced rather a harsh reaction from Italian Police and the works have been confiscated.

Out of curiosity, I have made an attempt to learn new dog idioms hiding in the depths of English. Guess what, if dogs had a voice they most probably wouldn't like a vast majority of them. Dog-eat-dog, dog days, and doghouse always sound somewhat pejorative. Eventually, we may also find a black poodle - a representation of the devil himself who comes to Faust or the three-head dog monster awaiting me at the gates of the underworld. Bad news for those of you who, after the transition, plan to attend Hades, say goodbye to your pets because all dogs go to heaven.

Once we dive deeper into the conundrum of historical references we may find the answer to the question ‘why dogs?’ in relation to the work of The Wa. Let’s browse through centuries to yet another painting from the European cannon - Venus of Urbino by Vecellio known better as Titian. A little dog is sleeping curled up in the corner of the bed next to the legs of the Goddess of Love. I was always curious about what it represents until I found out that this little pet is an allegory of the virtue of innocence. After all in juxtaposition with the presumptuous presence of high-and-mighty humans (personified by Venus), Nature remains innocent and voiceless. This is the key to understanding the piece and its relevance in the broader context but before we get there let’s hear our old friend Gerhard Richter.

I am interested in the speechless language of these pictures. Heads, even if they are full of literature and philosophy, become quite unliterary. Literature is invalidated; the personalities become anonymous. That's what is important to me here. The following quote elaborates on the body of work that was supposedly avoiding the ideological meaning and focusing solely on the appearance of the portraits or in other words making them voiceless and transparent. His claims have aged badly. Today each and every man from the portrait has an extensive Wikipedia page and can be recognized. Furthermore, if Richter’s gesture was some sort of ‘come back to the figuration, discredited and abandoned in the post-war a painting, today we cannot avoid the affiliation between some of the thinkers he depicted on the canvas and the ‘achievements’ of the modern world such as an atomic bomb. Even if some of the faces are not to be recognized on the first glimpse overall the portraits give a monument to the humanity representing brighter and darker sides of the culture of the man. The same culture which came up with the idea of making Biennale di Venezia and the same man who led the makeover of the Pavilion so it represents the claims of Nazi Germany.

It does not require rocket science skills to realize Germans are not necessarily happy about the nazist past that left a trace in the Giardini. In the course of the last thirty years, they have made several attempts to deconstruct it either by tearing down one floor (Germania by Hans Haacke in 1993), placing another building inside of the Pavilion (Bungalow Germania curated by Savvas Ciriacidis and Alex Lehnerer in 2014), swapping the Pavilion with France (2013), arranging it as a horrific Church of Fear.. (Christoph Schlingensief in 2011) or eventually turning it into a (de)construction site (Maria Eichhorn, 2022).

The ephemeral 43 portraits of dogs go beyond the representation of the interest of the non-human actors in the biggest Biennale in the world. I see them - each one of them separately and everyone as a whole - as a mirror that allows me to look at myself. The deep and innocent eyes of a human best friend will take it all. The mouths of dogs resemble a voiceless sting of remorse. They can’t judge me nor can they give me advice yet somehow their presence pushes me to question my status as a superior being, a master, a helper, a human, therefore, someone who is capable to change and be truly a thinking reed instead of the most dangerous specious. “