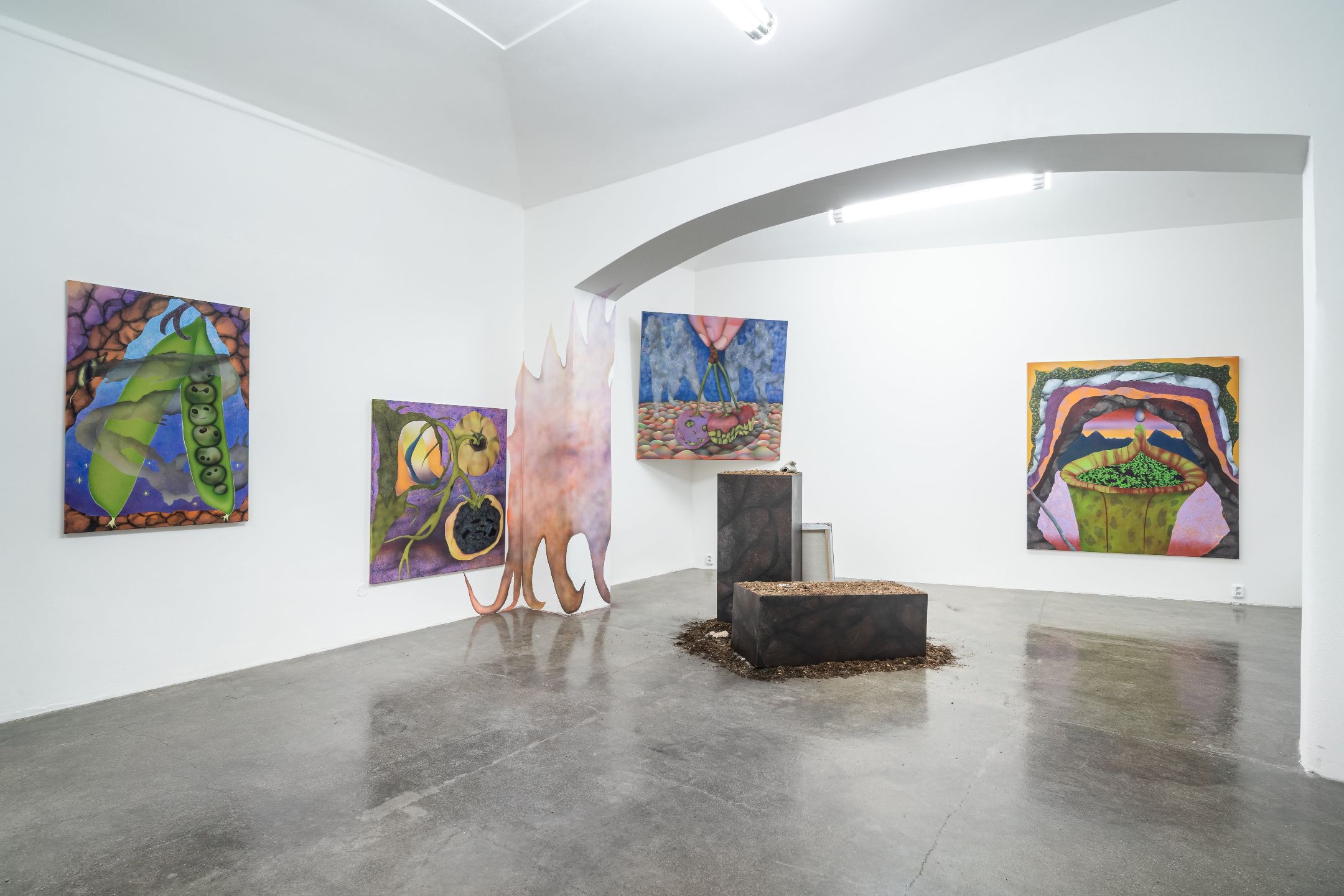 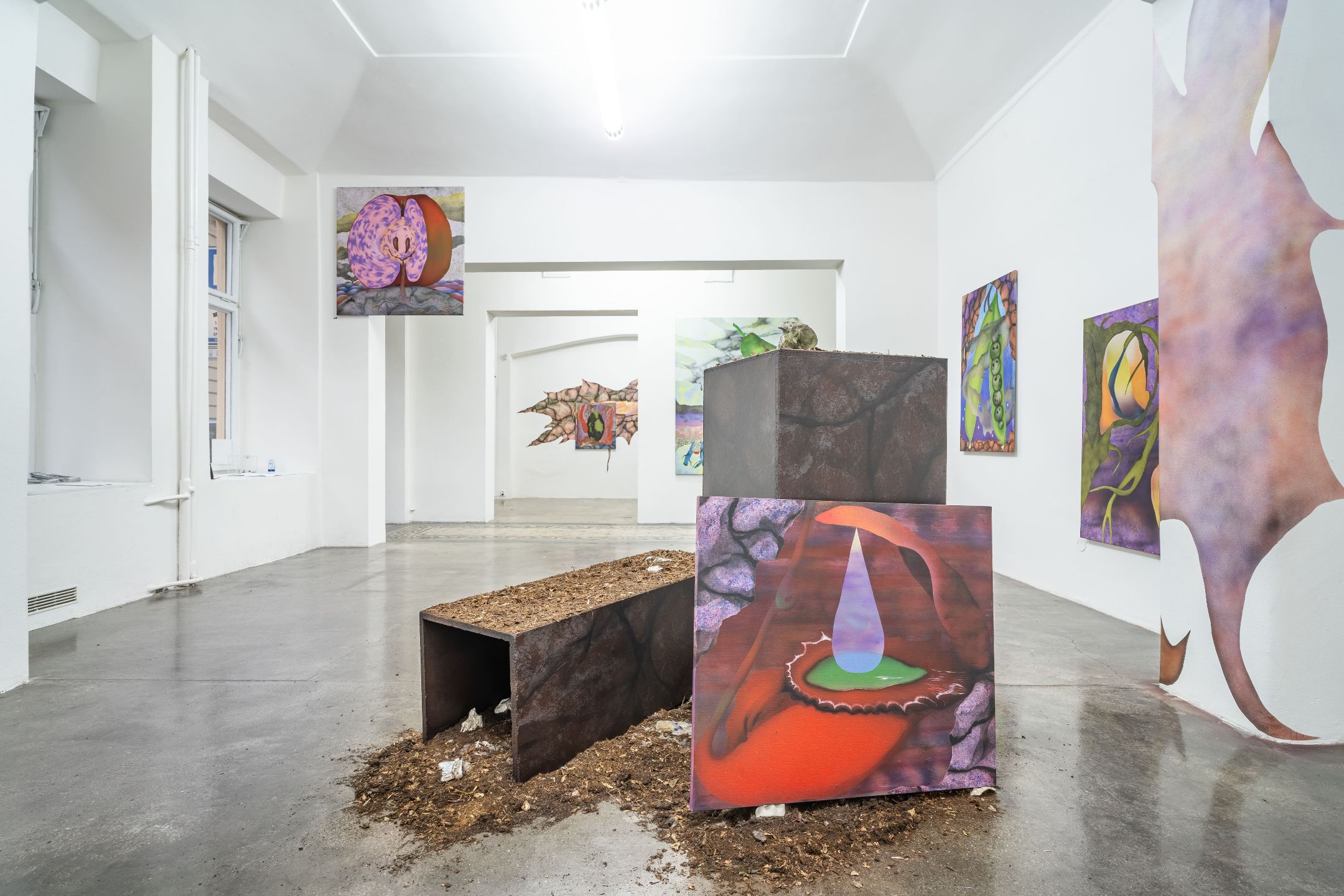 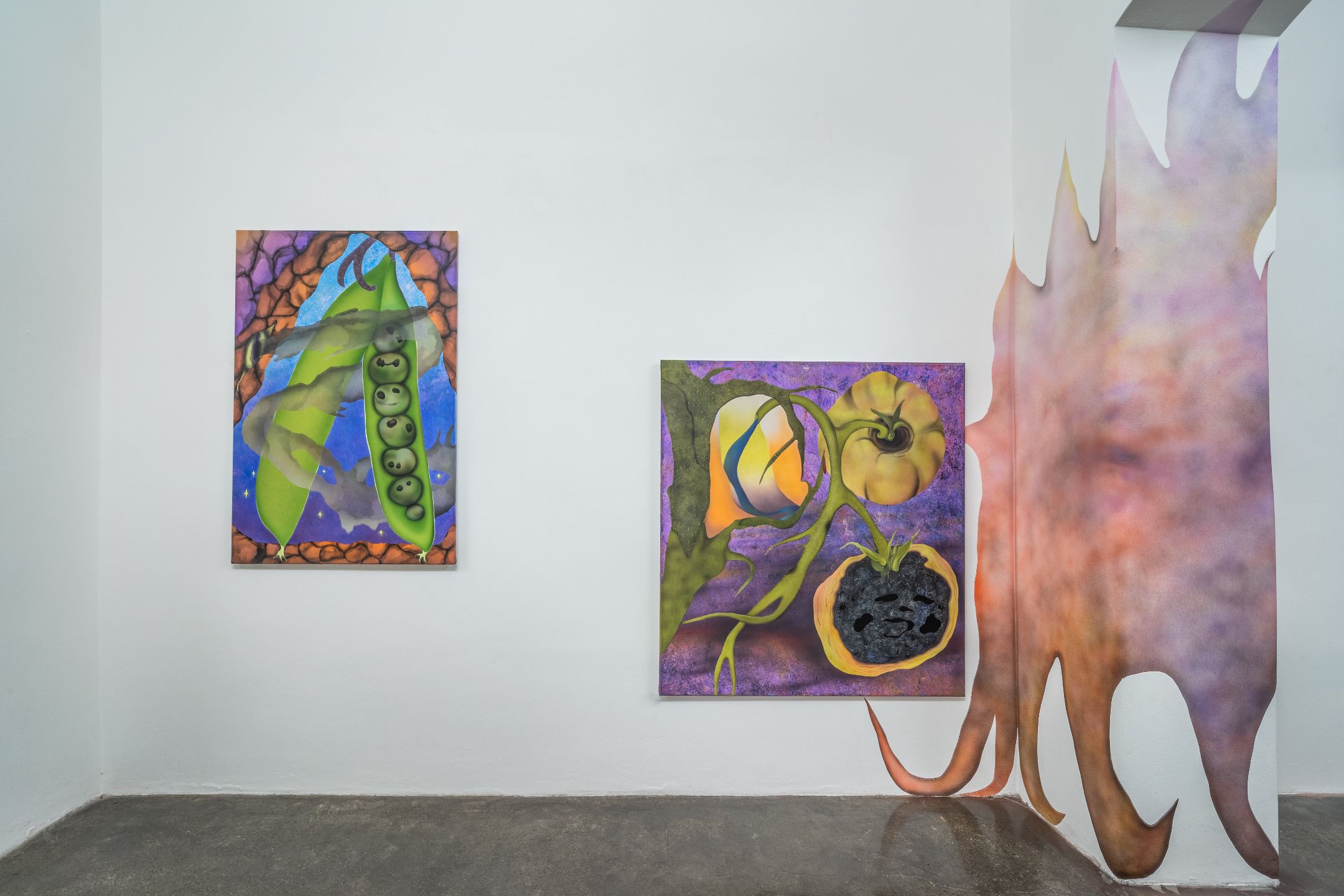 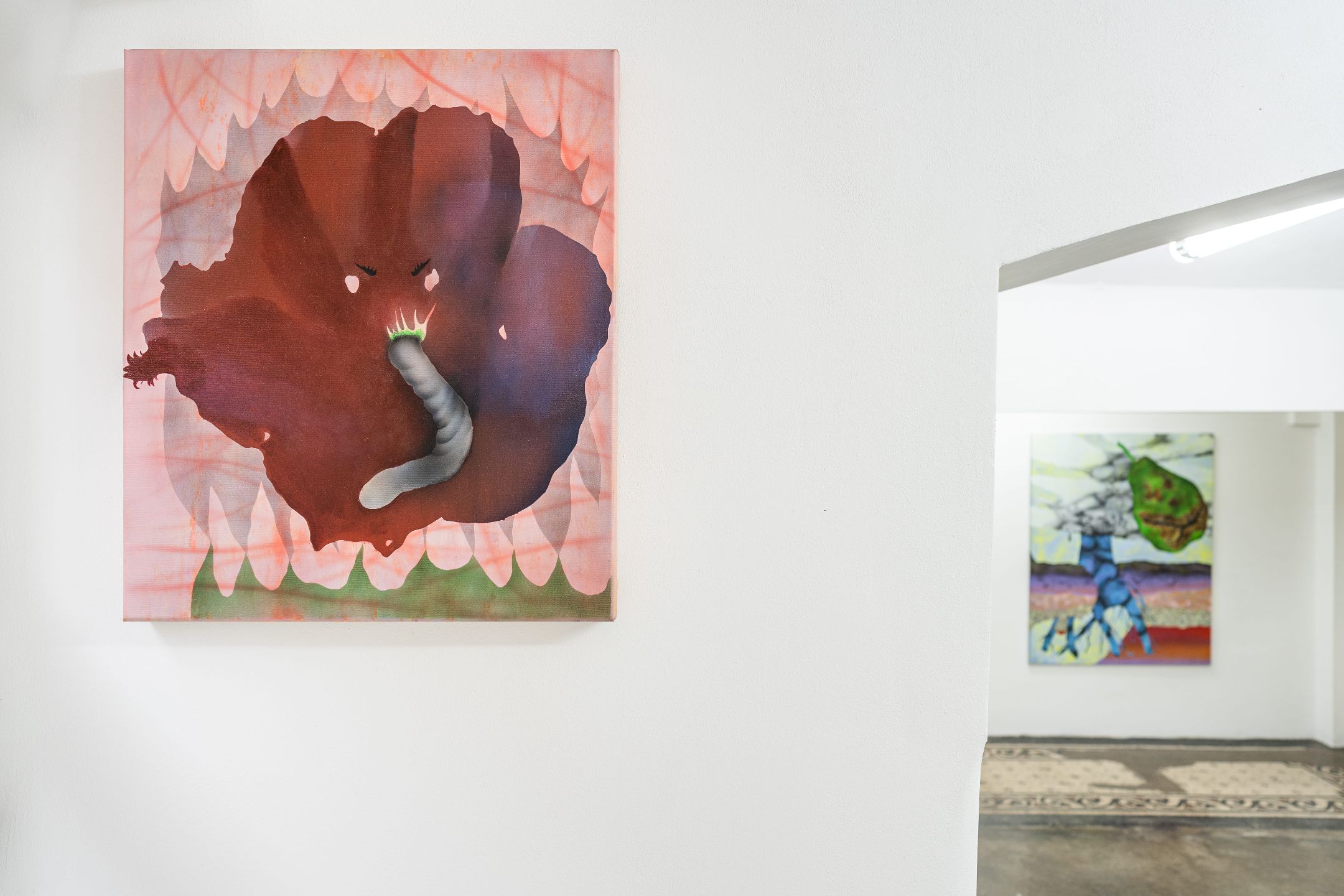 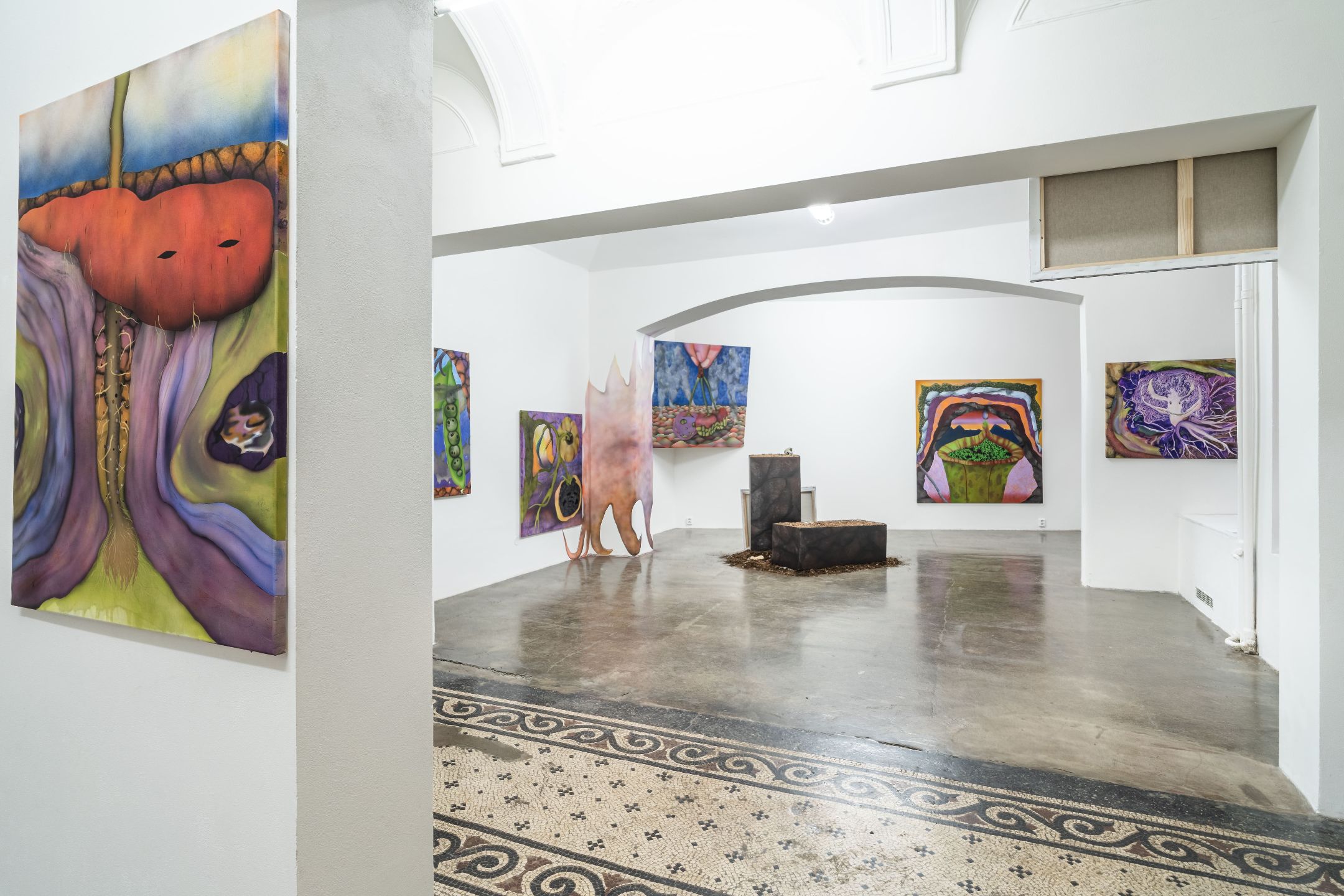 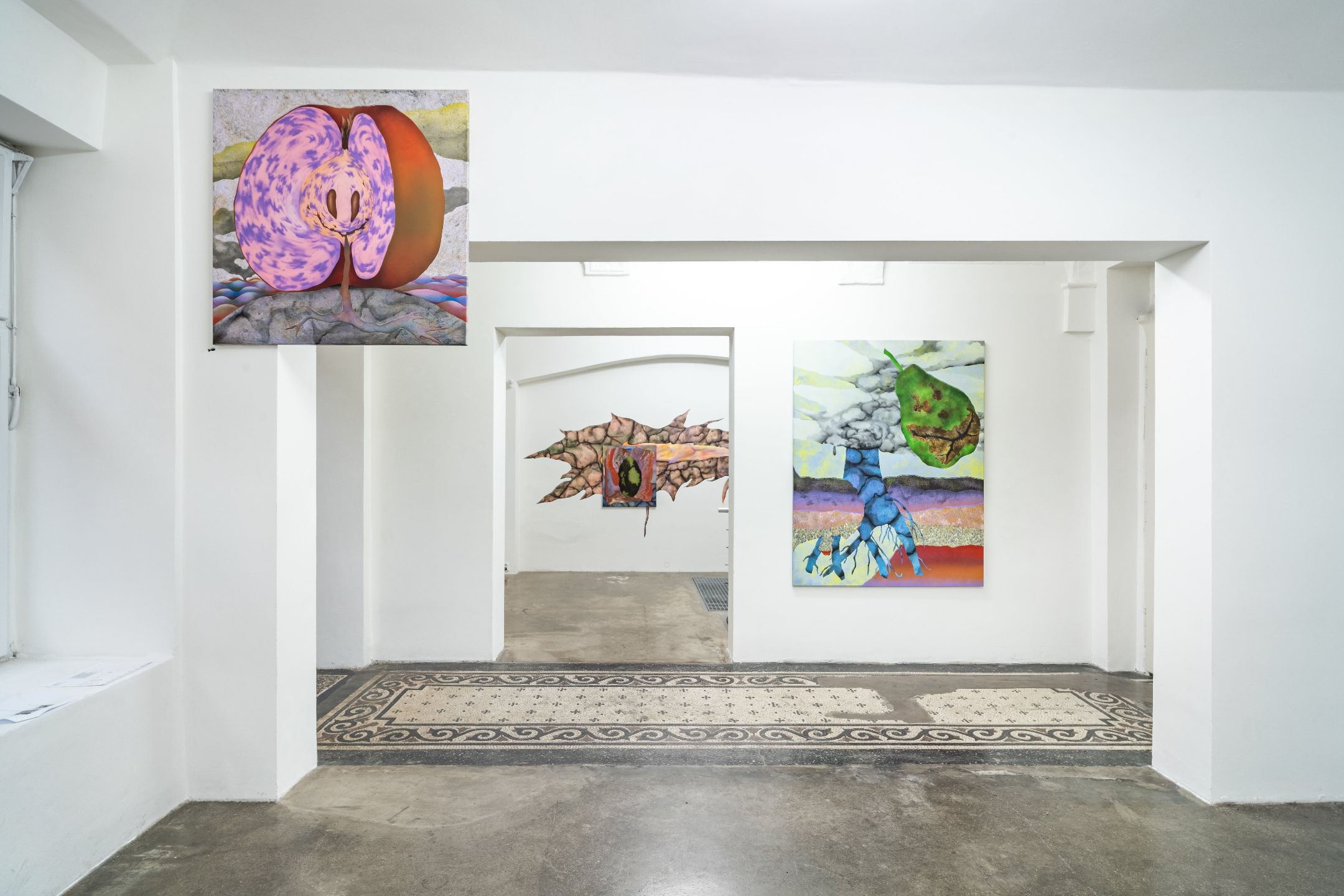 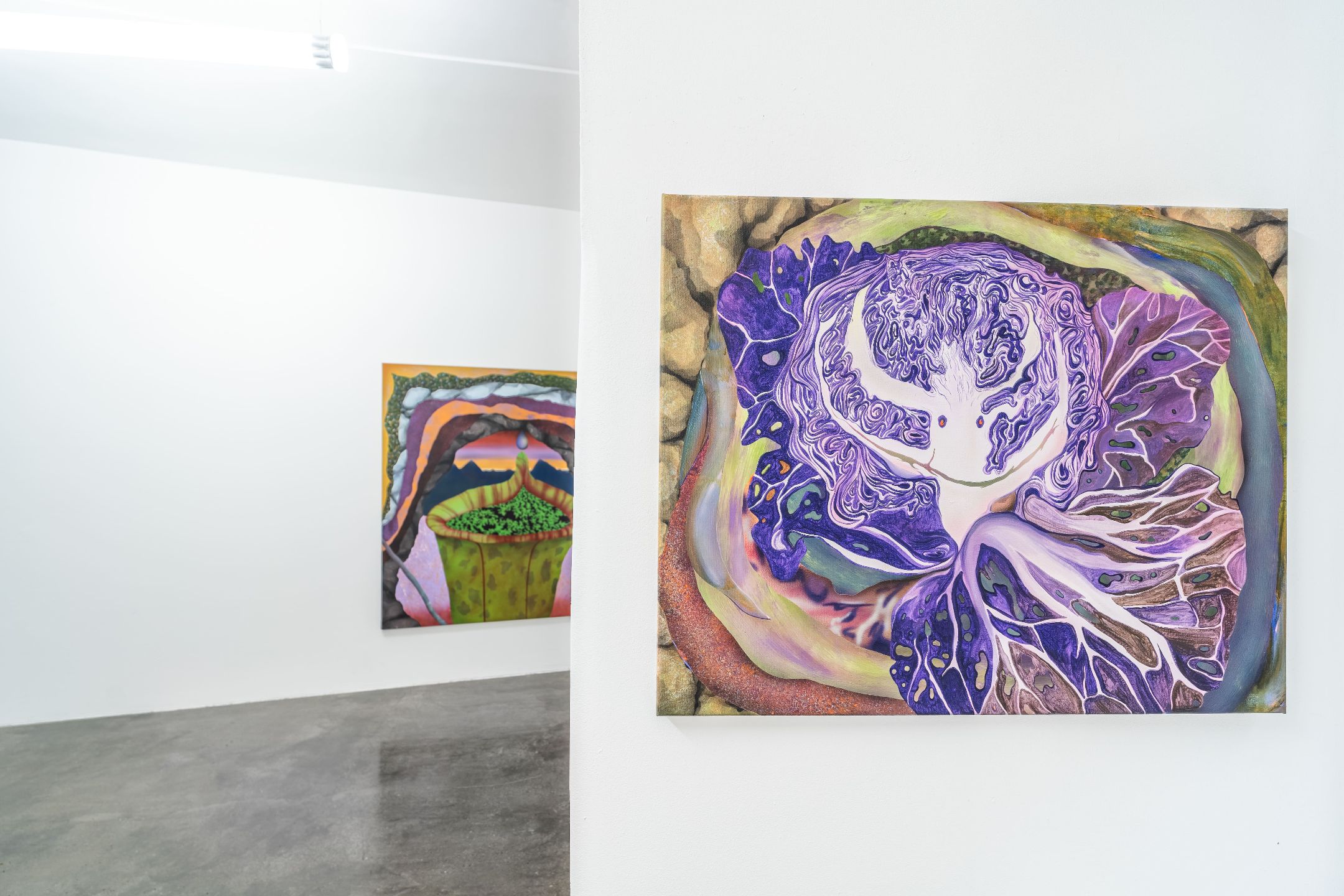 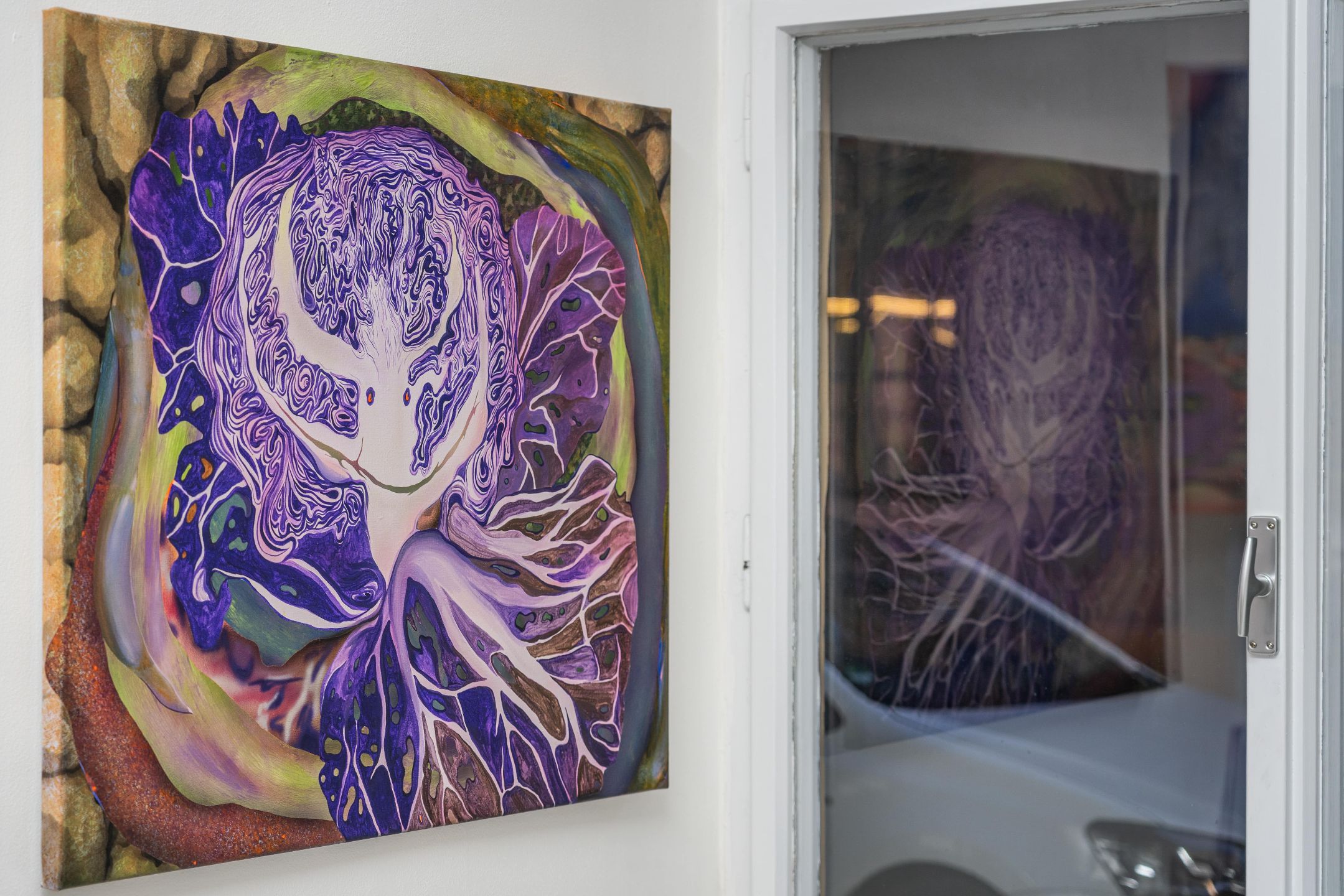 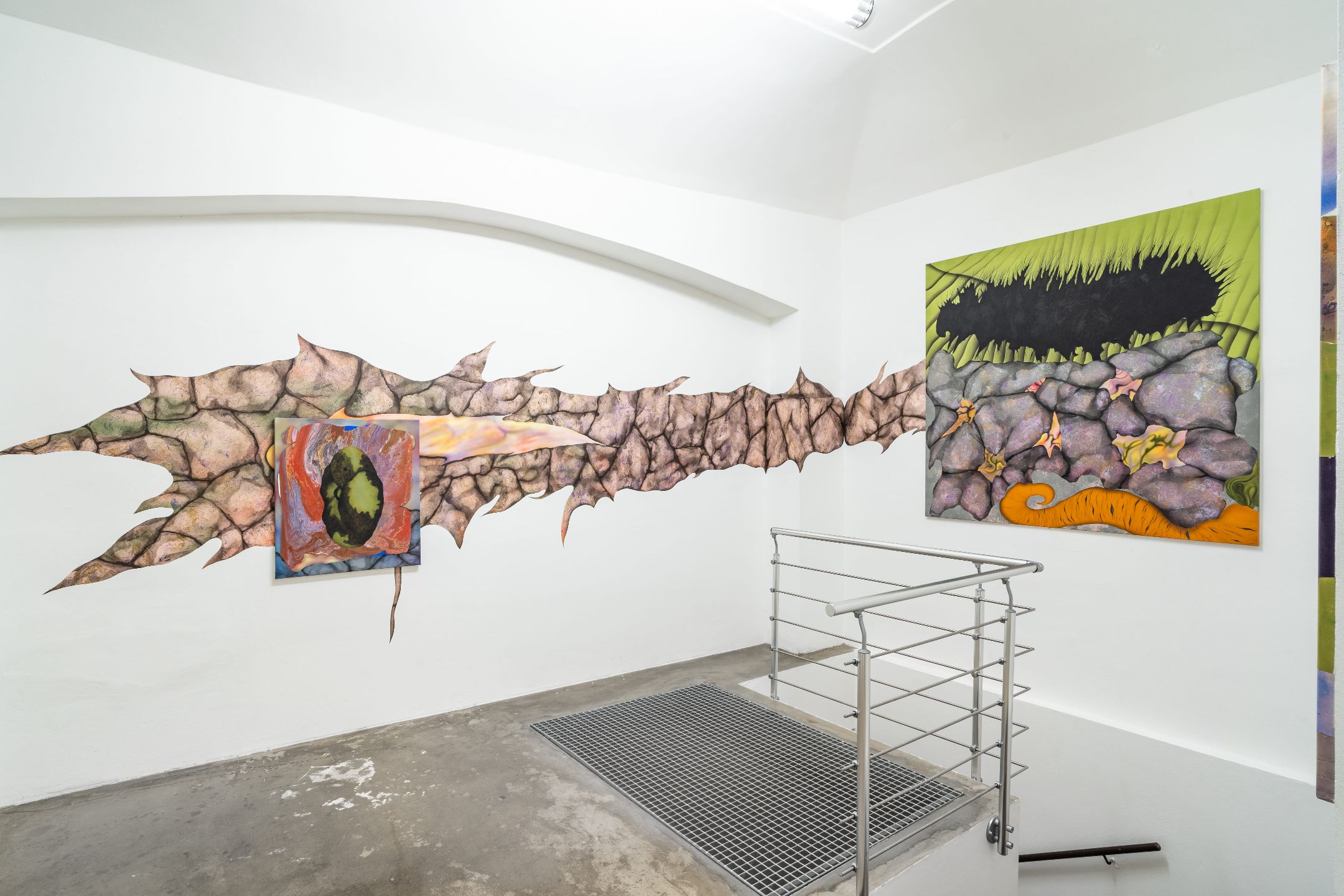 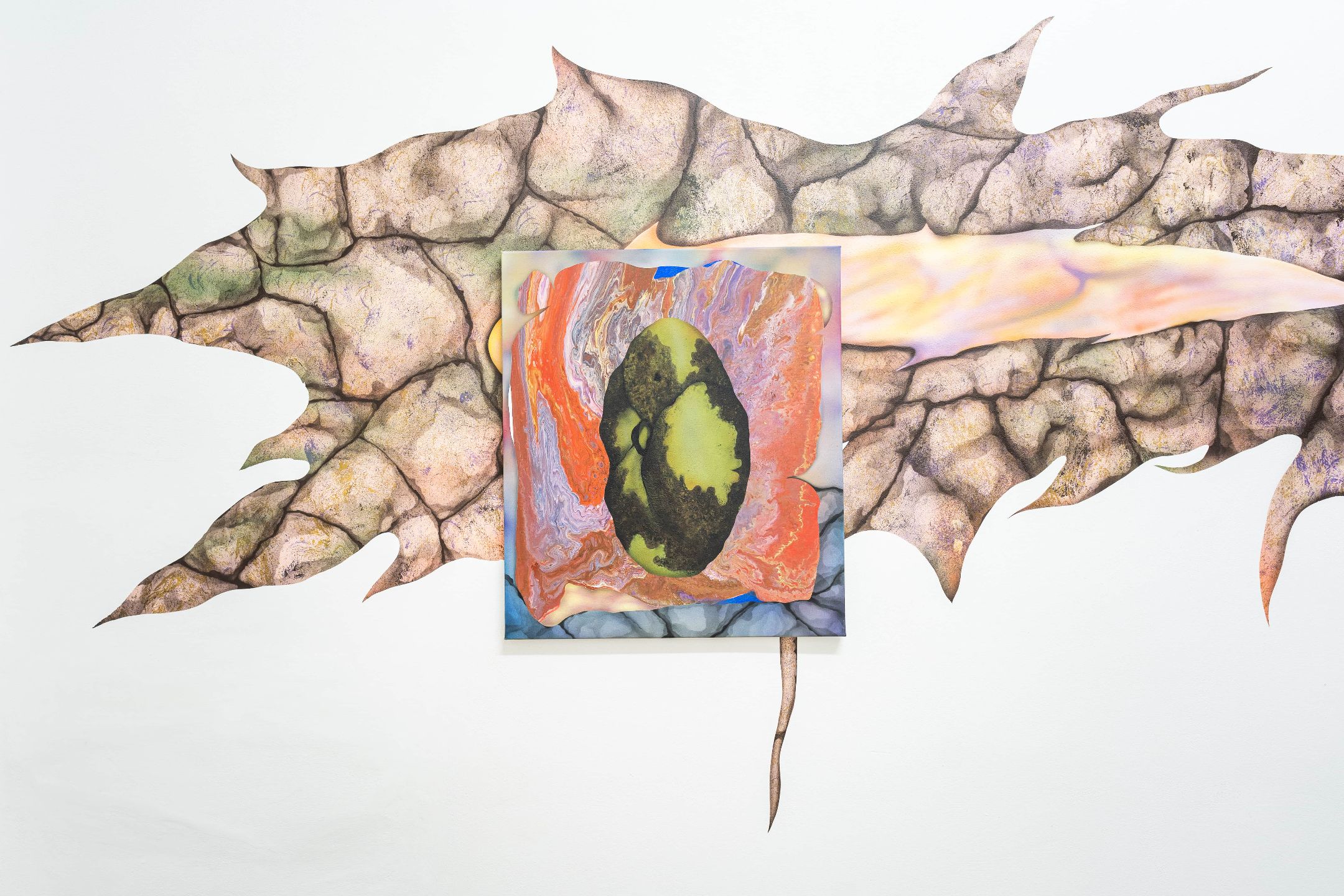 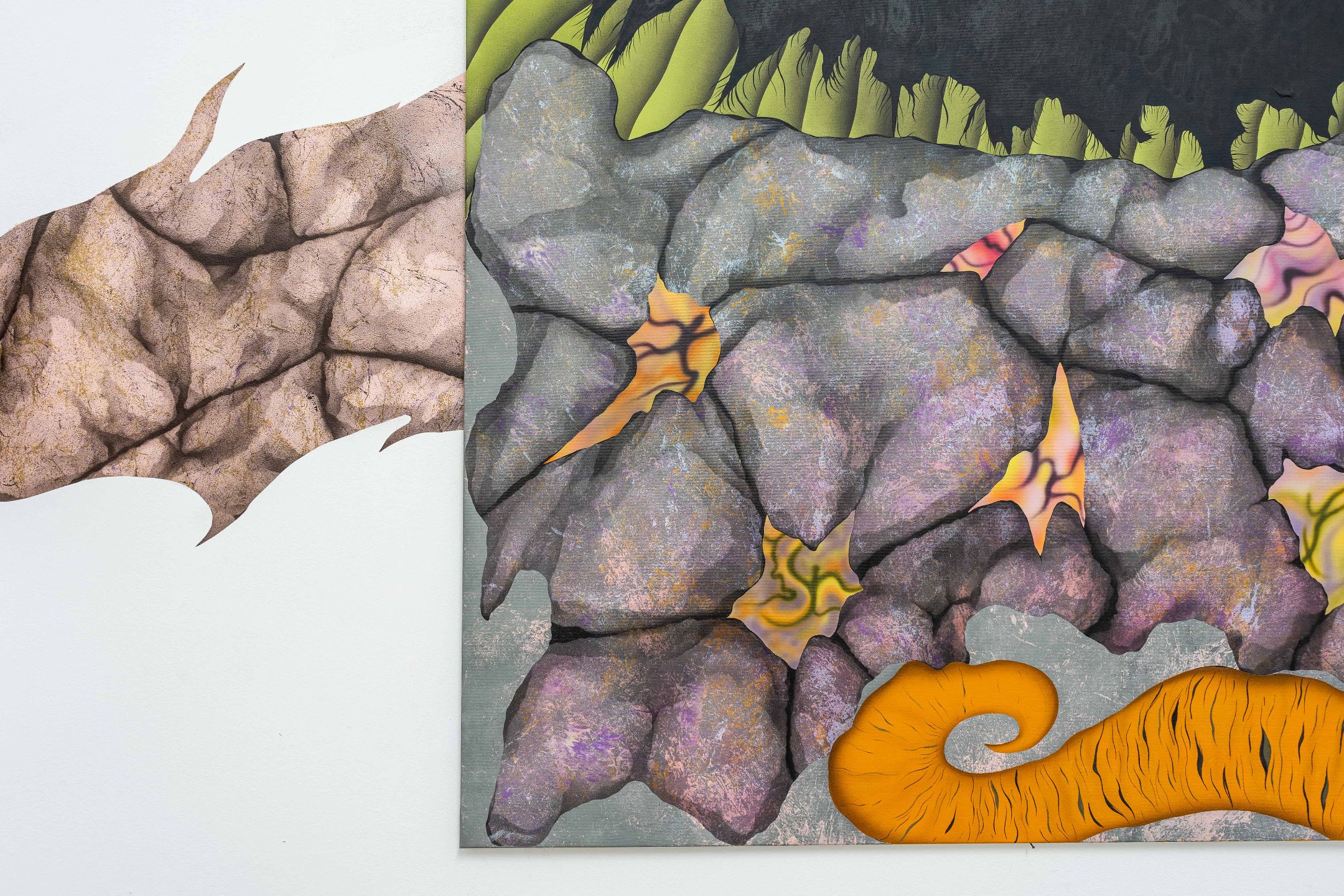 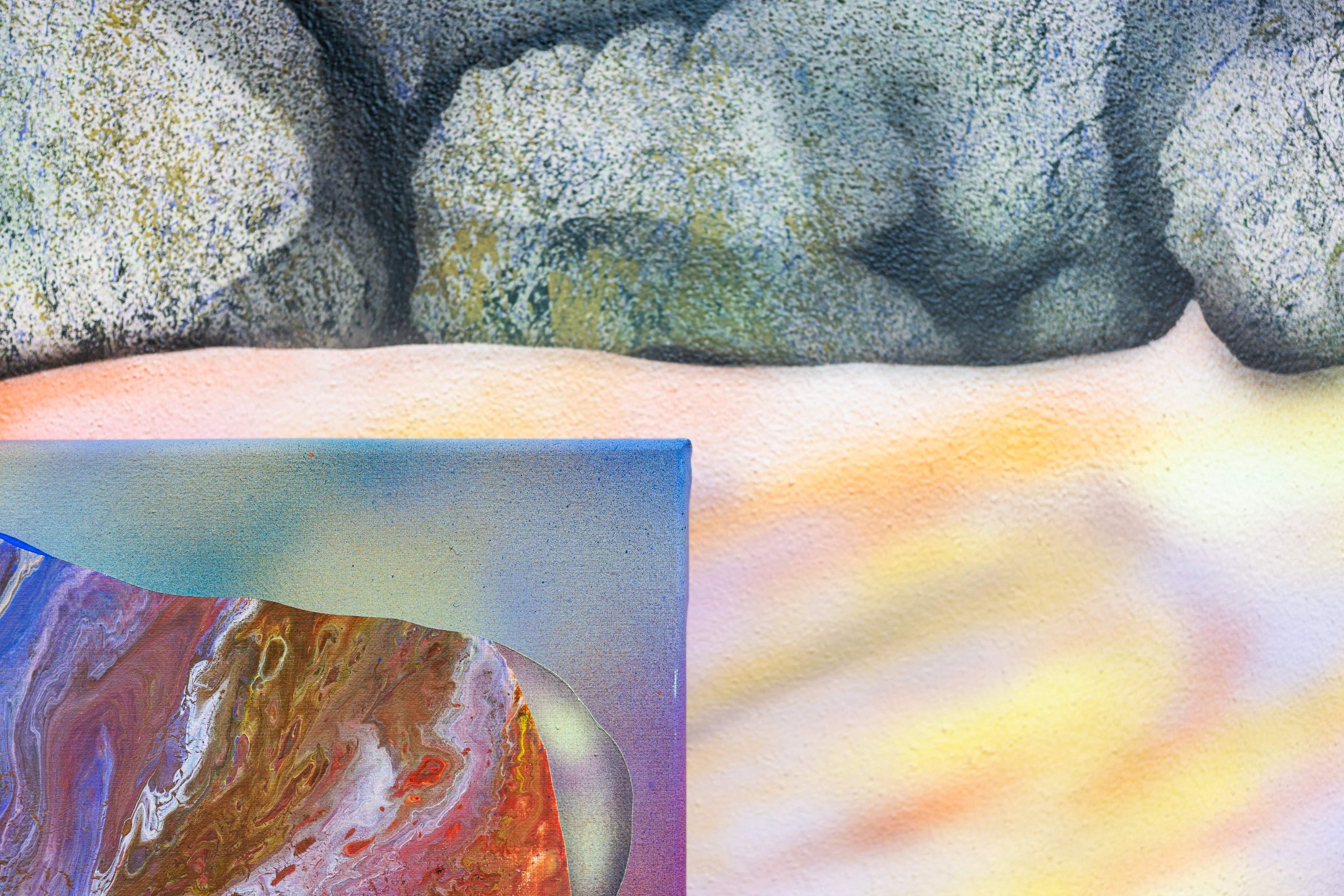 Kristína Bukovčáková (*1991), the Slovak artist and graduate of the Studio of Intermedia Confrontation at UMPRUM in Prague, in her exhibition Parallel Paralyzed Places Tour seeks, among other things, to draw attention to the problem of the ecological impact caused by human activity. The motif of vermin parasitizing plants, fruits, and vegetables appears as the predominant theme. The landscape, ravished by man, loses its natural immunity and is increasingly attacked by various diseases against which it is unable to defend.

Environmental grief, together with the fear of a possible and impossible future, forces the artist to reconsider her previous work and redirect her interest from the romantic relationship between man and landscape to the landscape itself. In her work, Kristína Bukovčáková not only reflects on the close connection between the two worlds, which is expressed, for example, in the very health of plants and their fruits, but she also opposes the widespread binary concept of man and landscape. According to Timothy Morton, a leading figure in object-oriented ontology, the Anthropocene is synonymous with the human awareness that humans are involved in planetary change and that humanity must live with this awareness forever. Morton understands the climate crisis as one of the ‘hyper objects’ - objects that are completely beyond human comprehension, but whose ubiquity inevitably connects all living organisms and enables a domino effect based on the actions of individual participants. Through this prism, Morton rejects the anthropocentric worldview, in which man is the center of the universe, in favor of animism, through which he believes that everything is alive.

A similar approach can be traced in the works in the Parallel Paralyzed Places Tour exhibition. Bukovčáková breaks away from her previous focus on figurative painting, where the subject is a human being, and creates natural structures using airbrush technique and print, often copying technical illustrations from old books of diseases and vermin. Viruses, such as mycoplasmas, are often transmitted by insects and infect not only humans and animals but also plants and their fruits. Following the animistic approach, Morton would argue that what is alive is susceptible to infection. Consequently, the author renders the infected fruits with human faces, contorted into comically aggressive grimaces that are meant to emphasize the pervasive despair at the lack of vigor in the battle against the climate crisis.

Bukovčáková also adds an organic dimension to her paintings by disregarding the canvas as the only defined place for self-expression, extending her paintings to objects in the space, the walls, and the floor of the gallery. The toxic colors of decaying fruit and vegetables spill freely into the exhibition space, absorbing the last of the air, only to be reborn as autonomous objects made of wood, another symbol of paralyzed places. By searching for natural structures, the artist tries to break out of the anthropocentric approach and make room for other living organisms, which are still inevitably connected to humans.